Yahoo!/AP reports that the Federal Communications Act prohibits the State of South Carolina from installing communications jamming equipment inside jails and prisons to prevent inmates from using cell phones to commit further crimes.

How many bars can they get inside of prison? I would imagine that cell phone reception inside an imposing concrete structure should be pretty dismal. And, instead of paying for some electronic wizardry to jam signals, the prison can install aluminum siding or other materials to further physically disrupt the cell phones inside the prison. Maybe the state officials need to think outside the box.

Just over three months ago, California started prohibiting the use of cell phones while driving. However, the law allowed drivers 18 and over to use a cell phone provided that they also used a hands-free device. So, I was quite surprised to see other drivers talking on cell phones these past few days. You can’t miss the unmistakeable sign: right hand glued to the right ear while driving. This morning, Palo Alto Online reported that the CHP had cited over 20,000 drivers for talking on a cell phone. Although the base fine is $20, the DMV states that “[w]ith the addition of penalty assessments, the fine can be more than triple the base fine amount.” In these times of financial crisis, we can thank our fellow drivers for chipping in an extra $400,000 – $1,200,000 to help out the state.

I just discovered OverHedged, a blog by Thompson Hine that covers hedge fund litigation. Earlier, I was reading a news article about credit default swap (CDS) agreements and started looking for some information on CDS litigation. Google directed me to this page regarding Aon Financial Products v. Societe Generale. Well-written and extremely insightful. A sign of a good blog is when you want to browse around and read their other posts.

The Florida Bar Member Search permits visitors to verify the standing of a Florida attorney. However, I think certain profile data is not automatically updated. 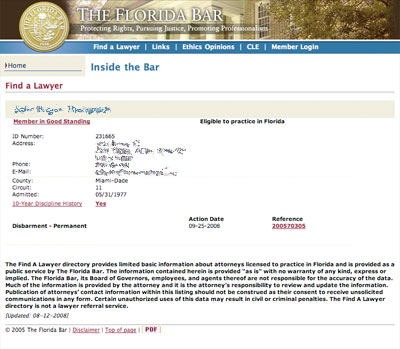 How else can you explain that on the same page, the listing shows that an attorney is a “Member in Good Standing” and “Eligible to practice in Florida,” but also was permanently disbarred?

This is the first iPhone 3G lawsuit I’ve seen so far. I wonder if the the iPhone 2.0.2 software update fixed the problem; i.e., slow 3G connection speeds and multiple dropped calls.

I chuckled the first time I spotted the typo alimoney. In some ways, the misspelling (alimoney) makes more sense than the correct spelling (alimony). After all, “alimoney” is about transferring “money” from the pocket of one party to another in a divorce proceeding. Of course, for the ex-husband or ex-wife that has to pay spousal support, the preferred spelling may be all-my-money. Google shows 11,700 matches for alimoney, so a lot of people have misspelling alimony.

New York Times: Can a Sandwich Be Slandered? Some companies have made a sport of using advertising to bash a competing brand: Pepsi and Coke, Colgate and Crest, Miller Lite and Bud Light. It was a rivalry of this sort that compelled Quiznos, the toasted-sandwich chain, to invite the public to submit homemade commercials in a contest intended to attack a top rival, Subway. . . . Subway promptly sued Quiznos and iFilm, the Web site owned by Viacom that ran the contest, saying that many of the homemade videos made false claims and depicted its brand in a derogatory way.

Where is tort reform when you need it? I think Chef Gordon Ramsay would be the ideal expert witness in this battle royale between sandwich chains. He is always insightful and entertaining. I’m no chef, but I’ve had enough sandwiches over the years to be able to tell the difference between a good sandwich and a bad one. My preference is Quiznos, Togo’s and Subway, from most favorite to least favorite.

Quiznos offers the best-tasting sandwiches. Their meat looks and tastes like real meat with excellent flavor and texture. Even their greens are better. Sauteed onions or the same-old shredded lettuce and tomatoes combination? No comparison. Subway must be feeling the heat because they now offer toasted sandwiches. However, while the bread is warm and crunchy, the fillings are just the same.

I like Togo’s. However, I have stood in line on more than one occasion saying (to no one in particular) that I wished Togo’s had toasted sandwiches. Usually, it comes down to how far I want to travel and how much change do I have in my wallet. Sure, Quiznos offers the tastiest sandwiches, but their sandwiches cost a pretty penny.