I was stopped at an traffic light this afternoon when two police officers on motorcycles entered the intersection from my left with their lights flashing. They stopped briefly and then proceeded through the intersection. At first, I thought that some dignitaries may be paying a visit to Silicon Valley and these officers were serving as a police escort. However, there was no train of black Suburbans following behind.

Instead, I witnessed a stream of “regular” cars, and finally noticed a funeral placard affixed to the windshield of one of the vehicle. While the funeral procession was driving through the intersection with the green light, there was no problem. However, once the light changed, the procession continued through the intersection at the same speed, nearly causing an accident.

The traffic laws regarding funeral processions in California is governed by California Vehicle Code Section 2817.

For the procession I witnessed, the practical issues are (1) the funeral placard is not that easy to see at first, (2) headlights are not as meaningful a distinction in the era of daytime running lights, and (3) after the police officers had departed from the intersection, drivers arriving later to the intersection may not have been aware that a funeral procession was passing through.

So, when the traffic light turned red for the funeral procession, a couple cars darted into the intersection from their left. Fortunately, they stopped before there was a collision.

The Arkansas Judiciary website offers Arkansas Supreme Court Published Opinions. This collection includes unofficial copies of published opinions starting from the Spring Term of 1837. I am fascinated by court opinions, not so much from a legal perspective but a historical perspective.

In Daniel v. Guy, 19 Ark. 121 (1857), the plaintiffs sued the defendant for trespass for false imprisonment. At issue was whether the plaintiffs were free or the slaves of defendant William Daniel.

The court proceeds to discuss the various legal presumptions in effect including the presumption of freedom for persons that appear to belong to the white race. Other important signals include whether the persons was previously held as a slave. In terms of expert witnesses, the court provided this summary:

Dr. Newton—Had read Physiology. There are five races—the negro is the lowest in intellect. Some physiologists are of the opinion that in the head of the mulatto, there is some negro hair, and some white hair, and that the negro hair never runs out. It would not run out before it passed the second generation. It may in the third generation have waves. The color, hair, feet, nose, and form of the skull and bones furnish means of distinguishing negro blood or descent. The hair never becomes straight until after the third descent from the negro, from neither the father or mother’s side. The flat nose also remains observable for several descents.

In 2171, I wonder what decisions by our present-day state and federal courts will appear as antiquated as this one.

Reuters: Supreme Court overrules Obama nominee in race bias case. Conservative critics seized on the decision, authored by Justice Anthony Kennedy, to demonstrate that Sotomayor was “out of sync” with mainstream legal thinking.

I’m not sure how the Sotomayor decision was out of sync with “mainstream” legal thinking. Her decision may have been out of sync with conservative legal thinking. Mainstream? Nah. After all, Ricci v. DeStefano was a 5-4 decision, meaning 44% of the U.S. Supreme Court agreed with Sotomayor. If you want to find someone that is really out of sync with mainstream legal thinking, take a look at Safford Unified School District #1 v. Redding, an 8-1 decision. If 89% of the justices on the US Supreme Court think one way, I think that line of thinking constitutes mainstream legal thinking. In a case that gave new meaning to Perverted Justice, Justice Thomas curiously was not troubled (in a Constitutional sense) with school administrators strip searching a teenage girl.

I really don’t understand this. There are plenty of successful 2-star and 3-star restaurants. I’m not talking about Michelin 3-star, but the 3 (out of 5) stars from the local newspaper. The fact is, I never trust 5-star ratings. If someone isn’t griping about a particular business (on Yelp) or book (on Amazon), you have to wonder whether the reviews are written by insiders: friends and family members. I certainly do. That’s how much trust you should give to online reviews. I think businesses should be glad that they can receive feedback from their customers. You can acknowledge or ignore the feedback, but at least it’s there. If you don’t have a feedback loop, you can’t even understand why your business is stalling because while a lot of polite customers may not “gripe” to your face, they will certainly tell others –online or off — if their experience has been less than stellar.

I thought I had seen every perspective on the possible impact of a bankruptcy filing by Chrysler, GM or Ford. Apparently, I had not.

Products Liability and Injury Lawyer Blog: Auto Industry Bankruptcy: How Will It Affect Products Liability Litigation? Should one of the Big Three file for bankruptcy, products liability litigants may be forced to petition the bankruptcy court in order to obtain permission to initiate new actions against a bankrupt automaker, or to allow them to continue proceedings already in progress in another court.

Even though we know that economy runs cyclically and that some businesses do fail, I still find it a bit unreal to consider that one of the Big Three might go under. All of a sudden, that deep pocket turns out to not be that deep.

I spotted the following statement this morning:

A paper trail is an identity thief’s best friend.

US officials suspect Marri was sent to America by Osama bin Laden to carry out a second wave of terror attacks after the 9/11 attacks. They say he was plotting to wreak havoc on the US financial system by hacking into bank and other databases. In addition, he received Al Qaeda training in the use of poisons, according to the government.

Yes, the terrorists succeeded. Again. Here we were preparing for another 9/11-style attack by taking our shoes off at airports while the terrorists had already moved on to their next target. They were busy plotting to wreck havoc on our financial system by hacking into bank and other databases. Well, our financial system is pretty much wrecked and, as far as we know, we’ve received absolutely no assistance from al-Qaeda in that regards. Turns out, these terrorists wasted their time. Instead of attending terrorist boot camp and earning a poisons merit badge, the terrorists should have been busy wielding a pen in hand and filling out mortgage applications. That’s how you wreck a financial system. No need to resort to exotic avenues when low tech solutions work perfectly.

I’ve never seen (or never noticed) this warning before. However, last month, I spotted this peeling sticker on the side of a gasoline pump.

Reformulated Gasoline…may cause a very small percentage of vehicles…to have fuel system leaks which may cause vehicle fires. 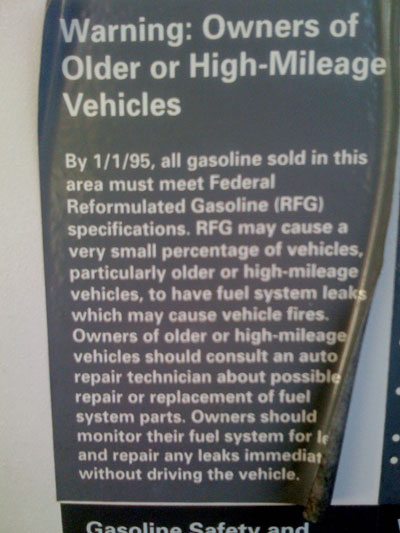 What the heck? Assuming these warning signs have been up since 1995, when reformulated gasoline rolled out in the San Francisco Bay Area, I find it odd that I haven’t see this warning elsewhere. Need to make a mental note the next time I visit a different service station whether their gasoline pumps also carry the same warning. However, I find this warning to be vague and unhelpful because it doesn’t define (1) a very small percentage, (2) older vehicles, and (3) high-mileage vehicles. How small is a very small percentage? 5%? 1%? Less than 1%? Considering the number of cars out on the road, a very small percentage could still mean a lot of cars. Secondly, what is an older car? Cars from the 1980s? Cars from the 1960s? Cars from the 1940s? Finally, what is a high-mileage vehicle? Over 100,000 miles? Over 250,000 miles? Seriously, the warning label doesn’t give the driver enough information to determine whether their vehicle is affected by reformulated gasoline.

Not Brobeck. Not Heller Ehrmann or Thelen. But, is there a law firm out there that is too big to fail? I wonder what the reception would be if a law firm headed to Washington looking for a bailout.

Last year, two Washington state lawyers sued Avvo, an attorney rating website, over the scores that Avvo had assigned to their profiles. Although Avvo managed to obtain a successful conclusion to the case within 6 months by convincing the judge to grant its motion to dismiss, it still cost Avvo a pretty penny to prevail. Now, we know exactly how much it cost Avvo thanks to a lawsuit filed by Avvo against its insurer that disclosed that Avvo had spent $134,000 in fees, costs and expenses defending the Browne v. Avvo suit.