Following in the footsteps of New York, California seeks to imposed its own version of the Amazon tax. Specifically, ABX8 8 seeks to amend Section 6203 of the Revenue and Taxation Code, which covers the collection of sales tax in the State of California.

(5) (A) Any retailer entering into an agreement or agreements under which a person or persons in this state, for a commission or other consideration, directly or indirectly refers potential purchasers of tangible personal property to the retailer, whether by a link or an Internet Web site or otherwise, provided that the total cumulative sales price from all of the retailer’s sales of tangible personal property to purchasers in this state that are referred pursuant to all of those agreements with a person or persons in this state, within the preceding 12 months, is in excess of ten thousand dollars ($10,000).

Expanded sales tax nexus . A contentious issue in sales and use tax administration relates to the extent to which a state may compel an out-of-state retailer to collect use taxes from its in-state customers. The issue is of considerable importance because, although Californians are required to self-report out-of-state purchases for use in this state, the compliance rate is very low.

In general, an out-of-state retailer must have sufficient business presence in the State (also known as “nexus”) in order to be required to collect and remit the tax. Under current law, a retailer is considered “engaged in business in this state” and required to collect the California use tax on sales made to California consumers when it maintains storage or warehousing facilities in the state or it has a representative or independent contractor operating in this state for the purpose of selling, delivering, installing, assembling, or the taking of orders for the tangible personal property.

Current Board of Equalization regulations specify that the use of a computer server on the Internet to create or maintain a web page or site by an out-of-state retailer is not considered a factor in determining whether the retailer has a substantial nexus with California. The regulations further state that an Internet service provider or other Internet access service provider, or World Wide Web hosting services shall not be deemed the agent or representative of any out-of-state retailer as a result of the service provider maintaining or taking orders via a web page or site on a computer server that is physically located in this state.

This bill provides that the term “retailer engaged in business in this state” includes any retailer that enters into an agreement with a California business or other entity under which the California entity, for a commission or other consideration that depends on actual sales, directly or indirectly refers potential customers of tangible personal property to the retailer. The referral can be by a link or anInternet Web site, or some other means, provided that the cumulative sales price from sales by the retailer to customers in California who are referred pursuant to these agreements exceeds $10,000 during the preceding 12 months.

The measure does not apply to advertising on television, radio, in print, on the Internet, or any other medium, unless the payment for advertising consists of a commission or other consideration that is based on sales of tangible personal property. Thus, banners and “click-throughs” on internet sites, such as Google, which are based on models other than sales commissions for referrals, would not create nexus with California. However, the bill could apply to out-of-state sellers using California-based marketplace sites, such as e-Bay.

The bill is based on legislation enacted in the state of New York in 2008. That law has been challenged on Constitutional grounds, but the challenges were dismissed at the trial court level. Currently, three states (New York, North Carolina, and Rhode Island) have enacted laws requiring remote sellers using on-line affiliates to collect use taxes, and lawmakers in several other states have introduced similar legislation.

I’m not sure about the part about Google though since they do have an affiliate network.

Privacy is dead. We have hit some inflection point where a car with a roof-mounted camera that voraciously records everything in its path is normal. 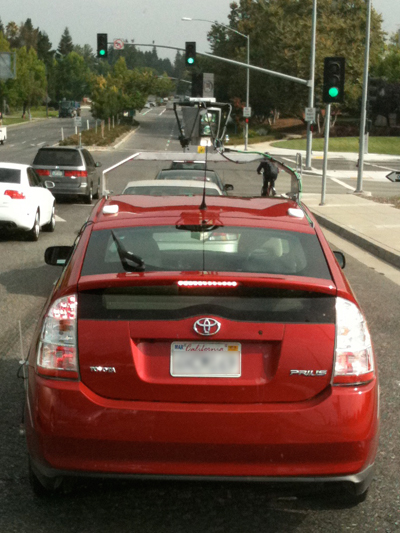 Think for a minute which scenario will attract the most suspicion: someone discretely taking photos of a sensitive location by hand or another person driving around in a car automatically capturing images of all people, buildings and roadways along its path. If someone really wanted to spy on us, I suspect they would brazenly conduct their surveillance in the open in one of those “Don’t be evil” camera-mobiles.

Recently, the Antitrust, Competition Policy and Consumer Rights Subcommitee examined the state of competition in the cell phone industry.

Senator Kohl stated that “[f]rom 2006 to 2008, the price of sending and receiving a text message among the four largest cell phone carriers increased by 100% from 10 to 20 cents per message” even though “the cost to the phone companies to carry text messages is minimal, estimated to be less than a penny per message, and has not increased.”

Here’s the funny part. Verizon and AT&T argued that the price increases only affect a small percentage of subscribers because most people purchase a text message package instead of paying a la carte. Actually, the price increases affect all subscribers because if the carriers charged 2 cents instead of 20 cents per message, then most subscribers probably would not purchase a package. Or, in the alternative, text message packages would be significantly cheaper.

Every once in a while, I’ll come across a law blog that does not have an RSS feed. The problem isn’t that their blog software doesn’t support RSS feeds. Instead, these bloggers have gone out of their way to disable their feed. I don’t get it.

The entire point of blogging, I thought, was to share your thoughts and perspectives with your readers in a manner that is convenient for them. Let your readers subscribe to your blog with whatever application they want. Seriously, I am too busy to manually keep track of blogs without feeds. However, if a blog that interests me offers a fed, I often end up visiting the blog multiple times during the day, especially if the blog authors are particularly active.

I’m came across a website for a county this afternoon. At first, I tried to click on some of the links in the navigation, but that didn’t work. Then, I noticed the the warning at the bottom of the page:

Some links on this web page/site will be blocked if you have a “pop-up blocker” running on your computer. You will need to “Allow Blocked Content”, or make www.*****.org a “trusted site”.

C’mon. Why not just open the link in the existing window instead of forcing the user to open a new window? After all, this is pretty much the way the rest of the Internet works, except for those site that created a need to install a pop-up blocker in the first place. Then again, we don’t install pop-up blockers any more since Internet Explorer, Firefox and Safari all ship with pop-up blockers built-in nowadays. Don’t fight the trend. Pop-up blockers are in place for a reason. Most people probably will not have noticed the pop-up blocker note and have thought your website was broken.

Why is Pennsylvania seeking to compel eBay sellers to obtain an auctioneer license? Aren’t there any college graduates running the bureaucracy? After all, a basic SAT question would be Pletz:eBay::

The Lawyers Weekly will be warning law firms about the dangers of Facebook. Will be? Yes, the article is dated January 25, 2008, or two days from today. Nifty time travel trick aside, the article is great linkbait because Kevin O’Keefe commented on it, and I feel the need to chime in as well.

Written by an electronic discovery expert, the article warns about the supposed perils of Facebook. True, Facebook users face some risk that their private data may be exposed to “fraudsters and corporate spies.” However, Facebook users can control what information appears on Facebook as well as who has access to it. In contrast, all the major credit reporting bureaus possess far more sensitive information in their databases, and you cannot easily correct or remove data that you want to keep out of the hands of third parties. I’m 100x more worried about a credit reporting bureau losing a data tape or a laptop with confidential information than someone hacking Facebook and downloading profile data. This is self-reported profile data and, as we should all know by now, you can’t believe everything you read online.

Also, the author presents a false dichotomy where social networking applications only have a non-work-related purpose. Sure, corporations and law firms should rightfully be concerned that their employees are wasting company time visiting blogs and other social networking sites for their own personal purposes. However, I am increasingly discovering that for long-tail searches, most of my results come from blogs instead of mainstream media sites. Nowadays, whenever someone encounters a problem, they blog about it instead of seething silently. And, when you are lucky, they also tell you about the solution they discovered. Ban Web 2.0 applications and you lose a lot of collective knowledge. Reminds me of this incident from the not too distant past.